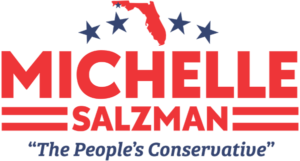 Dear Resident of District One,

My name is Michelle Salzman, and I am a Republican candidate who is running for Florida House District One.  As a lifelong Republican and resident of District 1, I hope that you will consider me for the honor and privilege of bringing the conservative values our incredible community to Tallahassee.

My family has been a foundational part of this community since the 1800’s. From the Davis’s who formed the Davisville community for which Davis Hwy is named to the Johnsons, Steeles, Allens, Browns, and Busbys whose names still echo throughout District 1 and beyond.

My parents settled in to our family home off of Pine Forest Road when I was in elementary school.  I graduated from Pine Forest High School and joined the US Army at 17.  I spent nearly five years traveling all over the world and learned so much about dedication, teamwork and leadership.

While in the Army I received many commendations to include an ARCOM (Army Commendation Medal), several AAMs (Army Achievement Medal), Armed Forces Expeditionary Medal and many more.

I was one of the first six US Army soldiers deployed through NATO to Bosnia where I spent my first month in a combat zone unable to safely leave the flight line because of snipers in the surrounding area and landmines that saturated the area. It was here that I was recognized with numerous awards for developing and implementing inventory control systems that saved the 1st Armored Division millions

After serving my country, I came back to Pensacola where I faced the same struggles as many of us do.  I used my leadership experiences and my Army College Fund to gain education and excel as a leader for my personal business as well as a leader in service to the Pensacola community.

For the past decade, I have worked alongside the other community leaders to help Northwest Florida become a greater place to live, work and play.  Some of my recent local leadership roles include representing the Education pillar for the Pensacola Mayor’s Transition Team, leading the charge for the Appointed Superintendent Referendum, as well as being a critical player in the Early Learning initiative for our community.

I have been on local, county and state level non-profit boards to include:

During these leadership roles, the community has graciously recognized me for these many achievements through awards received at the local, state and national level.

Now I hope that you will allow me to take my service to the next level and bring honest, dedicated service to Tallahassee as a team builder rather than just a symbolic voice in the wilderness.